Lessons to Learn from New Vegas (for TTRPGs)

I recently, finally, started to play 2010's Fallout New Vegas. I bought it on sale, but had never gotten around to it due to thinking it was some kind of mere add on to Fallout 3. Nope. Obsidian studios were told by their overlords to pump something out and they really did a good job.

Okay, so the thing that is inspiring me as an elfgamer is the way missions are set up. Basically, it is a sandbox world. You can go anywhere, but some areas are just plain dangerous, so you have to listen to the NPCs to see which routes are relatively safe.

NPCs will give you missions. They are all optional. Your actions can prematurely end them if you don't think carefully and kill the wrong people or something. The NPCs also usually give you an idea of where to go. Most of them even mark a place on the map you could check out.

I'm thinking this kind of approach could be particularly useful on Carcosa. My players have--thanks to risky psychedelics-- managed to glean the workings of a few rituals, but they are still a little rudderless. I do appreciate the few rituals that mention geographic locations though. I've been thinking about ways to give them more quests.

What I need to do soon is to have a small camp be encountered the next time the PCs are out exploring. The camp will have a sorcerer looking for a few humans for sacrifice purposes. The PCs will probably suss this out as evil and work to kill the sorcerer, or maybe they'll get down with evil. It's their choice; we have X-cards and social contracts to protect us. You can choose to do an evil run in New Vegas. It changes the outcome of the game, and makes people's opinions of you start to sour.

Speaking of opinions, you can usually use your words to steer conversations to peaceful outcomes in FONV, or insert expert observations thanks to your skills. I like that. Unlike a game with a reload system, there is no reason to keep the dice out of the equation though.

Freedom. Consequences. Many little things to do everywhere on the map. I do recommend New Vegas style sand-boxing.

Email ThisBlogThis!Share to TwitterShare to FacebookShare to Pinterest
Links to this post
Labels: Carcosa, inspirations and ripoffs 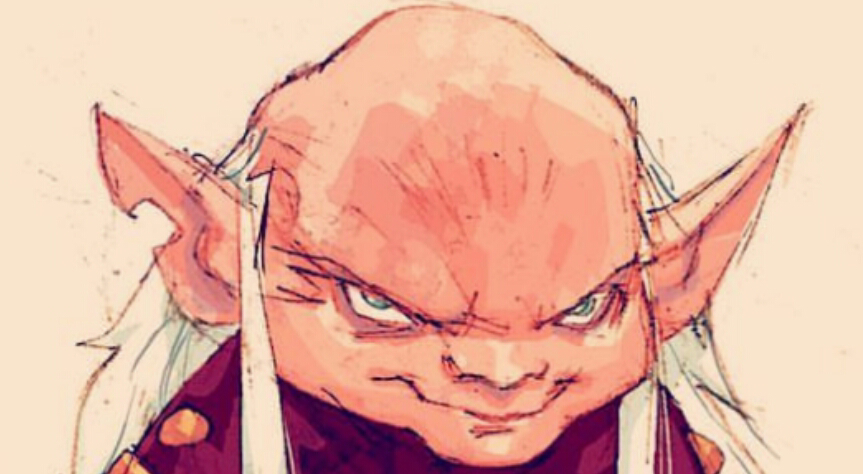 Your PC eyes a tough lady in a bar. "Might you be looking for employment?" you say.
She regards you cooly as a bald hobbit rolls some dice. "Mayhap I am. Sure am thirsty though."
"Ah, well,  feel free to buy a drink. I don't imbibe myself."
Well you just missed a social cue. That bald guy was the Dungeon Master. He was rolling 2d6* to see her beginning loyalty. Each time you screw up, that number goes down. Can you guess what happens at zero? Next time, start by buying your henchman a drink.
*: Snake eyes mean they'll rob you at the first opportunity. Boxcars mean they'll follow you fanatically lest you get really murderhoboey.

Too many click-clacks! 3d6 down the line. Once.

I like me some quick character generation. You can roll a 2d6 to get your scores and call it good, or add in a third d6 to find out which one of these scores is your first score (the rest follow in order, as Crom intended). These scores are probably too week for power-fantasy D&Ds. 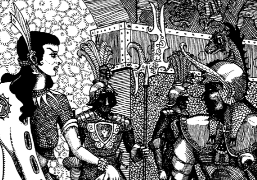 The first Petal Throne RPG is very close to 0th edition D&D. One of the ability scores is renamed, and they are expressed as percentiles, but there are no rules as written-type skills for them to be applied to*. Take, for instance, how we handle grappling:

Players often ask about the possibilities of physically capturing a surprised opponent (rather than striking him). This, like many tasks requiring arduous physical or mental action, cannot be legislated easily by the rules... the character's strength, intelligence, and dexterity are added together and averaged... percentile dice are rolled, and if the score is less than the averaged figure, the action is successful.

So it similar to the roll at or under ability score that most D&D players were starting to resort to in order to figure out what happens when failure needs to be adjudicated.

Later in the book, we get a play example, which further shows us how Barker would run games at the time he wrote the first Tekumel game.

Player: We listen at the door.
Ref: (rolling die) You hear nothing.

So it seems that Barker probably did the x in 6 method of listening at doors. Maybe an x in ten since he was so fond of percentiles though? BTW, in his book, d20s are actually numbered 1-10 twice and he feels the need to tell people how to use them to generate 1 to 20 numbers. He treats random number generation as a thing that people just weren't used to at the time, giving us lots of parenthetical advice and procedures that modern roll players ain't got no time for.

Player:  We have three men trying to open the door.
Ref: (rolling dice) The door opens.

So now I see dice plural, and that tells me either he isn't consistent with the singular die vs plural dice--but I think he is because he uses "die" a couple lines down when getting into surprise rules-- or he went with percentile chance to open a door with three dudes. Maybe he has their strength scores written down and does some mental math. I dunno.

Player: Our strongest warrior... is lying flat on his stomach and prodding the hasp [of a treasure box] with the point of his spear.
Ref: (Mentally giving the warrior a 20 percent chance of being hit by the tiny poisoned projectiles hidden in the hasp, rolling a die and finding that the spines missed...) A handful of little spines go zipping over the head of your warrior. He's not injured. The chest comes open.

So we see here that PC skill had nothing to do with avoiding a trap, it was all up to the description the players gave of their approach, as well as a little luck. Very old school.

Player: We're searching the chest for secret compartments.
Ref: You find none. That's all there is.

Once again, the players describe something, and the Ref just decides the results. No spot or search or INT checks are rolled. Let's see what happens when they encounter an obvious trap in an idol surrounded by coins:

Player: He pushes just one coin off the altar toward himself. What happens?
Ref: (Laughing fiendishly) That's all it takes to set off the trap. A great metal cage falls clanging down over all of you. I believe you were all up near the altar--nobody specified leaving any of the party behind to guard the door, and thus I assume you were all within the 20 foot square area covered by the cage. (Rolling percentile dice, giving the party a 20 percent chance to have had one or more stragglers outside the cage area...)

So it seems he was a fan of 20% chances maybe. Well, that's about all I have, but if you run across other examples of Barker's play style, I'd love to hear them.

*raw skills seem more like backgrounds. Barker seems to have a common sense approach to them. If you have the skill, you know how to do certain things. No dice involved in doing them. 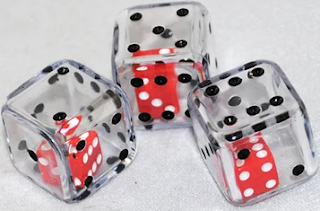 I've started a new project. I'm tired of all my sideways books of tables that are too complex. So I'm doing my own Judges Guild style take on Ready Reference Sheets. The first is below. Roll a few times on it with a d6 for a tens digit and another for a ones digit.

Tekumel Hack to get you into EPT 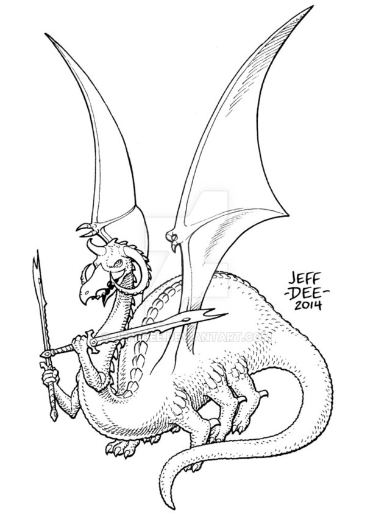 So embedded below is a hack designed to get the players going (the title is a reference to the subject first post of this blog, where I talked about Ebon Bindings). I personally, as the GM, am going to be using Empire of the Petal Throne's original 1975 game rules for the most part. The goal of the hack was to bring the percentile nature of the ability scores more into the game and to unify mechanics so it's easy for beginners to grok. Roll low is good for everything in the hack except damage. Of course you want high damage. The spells are a bit better too now, if I say so myself. I wanna see some gray hands and silver halos flying about soon!

BTW I recently discovered Jeff Dee's Tekumel take and it is sweeeeeeet.

Read below or on Google Docs.

Email ThisBlogThis!Share to TwitterShare to FacebookShare to Pinterest
Links to this post
Labels: I made an RPG, My Campaigns and houserules, OSR, Tekumel Petal Throne

I was thinking about what all I should write about the drow, but a picture is worth a thousand words. So this picture is how I fixed the problematic skin color issue of the drow. Yay! Aren't you happy with your new drow? No more racism in your D&Ds. Happy Holloween!

Email ThisBlogThis!Share to TwitterShare to FacebookShare to Pinterest
Links to this post
Labels: monsters and traps, My Campaigns and houserules, races, use this
Older Posts Home
Subscribe to: Posts (Atom)