[MAP] Tomb of Horrors for DCC funnel play and beyond 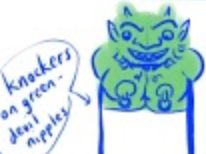 Green devil nipples ahoy! Click that map to embiggen even more. All the $ signs are for secret doors, and they tend to point to where they are with their bottom stroke.

First, have another map. I know. I make a lot of these and they are kinda my proud moments.

This time, it is a North to South reversed take on the infamous Tomb of Horrors. I ran some dudebros' DCC zeros through there, and the results were very fun. I noted the upside down compass rose all over the place to remind myself, because Uncle Gygax's description used cardinal directions a lot, but it turns out that I can pretty much run the place from memory/ad libs (improvisational changes happened because I wanted to change it quite a bit and when I map out an area I can't help but change a few things).

I'll detail the changes and tell what happened when we ran zeros through a dungeon Gary made for high level characters. A few people asked me, when I advertised the game on Discord, "How can you have level zero people do that place?" The answer is it's super easy, barely an inconvenience. We are dealing with role-players here, people that solve impossible problems every session. Sure, a lot of them died along the way, but that is a sacrifice I'm willing to make.

Area (1): This was one of the false entrances, but I've modified the original module ones and added a few extra ones.  The players eventually explored them all. (1) was hit on a secondary outing from the town. The town was inspired by Return to the Tomb of Horrors, a TSR publication that expanded ToH into a second dungeon and added a death cult city to the tomb.

That's what the "Macrabre Misfits" part of the map refers to. The PCs are from that town, and some players really relished the role of fatalist PCs. Anyhoo, room (1). If the lever is messed with while no one is on the flushly-raised-with-the-floor, helical stairwell, it doesn't budge. If someone is standing on the stairs, the lever can be operated by someone else and the stairs will lower... very swiftly and hundreds of feet down into hellfire. Yeah, hell is under the tomb and red devils in hardhats work here.

The devils were relatively friendly in a water-cooler shlub kind of way, but not at all on the players' side. One was convinced to give some hints in order to get a PC to put in a good word with the PC's goat (devils dig the goat horns). But the devils actually have clipboards with information on how things work with special notes to give to the PCs sometimes. The notes are lies. The devils are evil after all, and PCs are like bothersome rats messing up a dungeon that the devils will have to clean and fix it again. 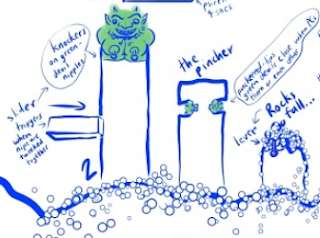 So here are the other false entrances. You may recognize the sliding rock one (2), which is modded with death flames for people that are insistent on messing with those knockers on the green devil's knockers.

The pincher: I ended up putting a couple daises with hand-prints on them at the two east-west ends of the room. Nothing happens if just one is pinched. Two PCs work together to put their hands on the two prints, the devil faces slide closed in a macabre make-out session, and the PCs are trapped inside until they die of hunger. Actually, if I run this again, I think I will make the kissing devils steam up the room, steaming trapped PCs to death.

I don't need to explain the rocks fall room, right?

During the first trip into the tomb, the PCs threw rocks at this statue, a god of death effigy. Some devils taking a lunch break on top of the tomb leaned over and yelled at the PCs about that. Was a good way to introduce the devils. Later an old lady made a Japanese style pilgrimage to the statue (clap and pray). She gave the PCs some advice. She was a death cultist, so it was bad advice.

So this is the actual entrance. Of note is that I put a P where the door painting is. I put PT symbols to remind me to see if PCs trigger a pit-trap as they are walking through. Since I didn't want to worry about exactly where the PCs are stepping (in the original, the path means almost nothing), I just had quantum pit traps here. The PCs detected almost all of them with guile and goats. What I did have the path do was be a Morse-code so the smartest PCs get the poem that gives vital clues to keep them getting deeper and deader into the tomb.

But before we jump through that portal, lets talk of the catoblepas. This loathsome beast wanders the swamp. PCs that walked up to it made a save. Failing would spell death (all my players were lucky), but passing the save still gave spooky glimpses of horrible deaths possible in the tomb. Nobody died in the way foretold. Doesn't matter. Was a great mood setter.

This is the place the PCs tried before they learned to love the portal. The monster was not a "mutant gargoyle" but a four armed, winged, snake demon frozen in temporal stasis till a PC opened a door. It killed many people. I forgot to mention it's necklace to the players at first, and went back and re-illustrated it. DON'T FORGET THE NECKLACE! 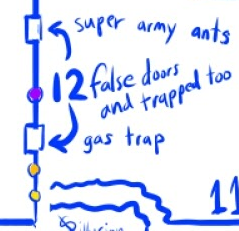 Okay, so once the party finally got through the portal, the entered (11) (statue room, nothing to do at first because I forgot to mention the necklace) and then the hall of spheres. I hate the name because it sounds like "spears" and we have players from around the world so we really have to take pains to use clear language. And besides, there are spear traps in the original module. Also, heck, how can you use the word sphere for a 2D image. That's a circle, man. So, to avoid at least one aspect of that confusion, I changed the spear-trap doors to the ant trap and gas trap. The gas gives super-plague buboes within moments of inhalation, and the super army ants can eat a henchman in 10 seconds flat. Both were triggered.

One thing to note about the secret but necessary passage that leads to the cathedral is I switched the entrance side to the other wall of the hall. It's pretty annoying to work around passages that go under other areas when you are using a virtual tabletop and fog of war. I added a pit that was bottomless and one detour loop too. Players did not really go for either, sensing rightly that it would be bad for them. There was a hand-print dais here, and the PCs wisely did not touch it. 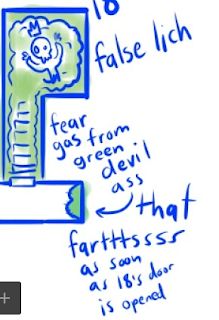 Adding fun green devil bits was very fun for me. The players encountered this green devil ass and wisely chose to shove a whole cheese wheel up it. This brilliant move saved them from the fear gas. They killed the false lich shortly thereafter. 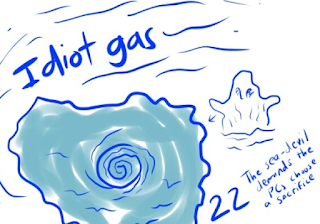 I asked the players to just role-play the effects of the idiot gas here. I didn't ask for saves. They role played the heck out of this and raced to fulfill the sea-devil's demand. I was so proud of them. One sacrifice later and we had the PCs transferred to (25) as a reward. You may note the OG module's siren is missing. I relocated her to the room of despair.

(25) is where the tale ends for our adventurers, because a PC, still under the effects of idiot gas perhaps, made a wish with the monekey's paw diamond it turned the party into a bunch of atomic bees doing a plank-length vigil over the tomb's true treasure. Was a bit of a shame; I wanted them to experience the doors bleeding like The Shining's elevator. Ah well, I'll probably run it in a few years again.

Speaking of which, if you want to join any of the games on my discord, email me at claytonian at the gmail.coms and I'll send you an invite. This is what I currently run:
Carcosa