Deep Carbon Fan map. Click to zoom. Then view it in its own tab and you can zoom waaaay in, Morty. 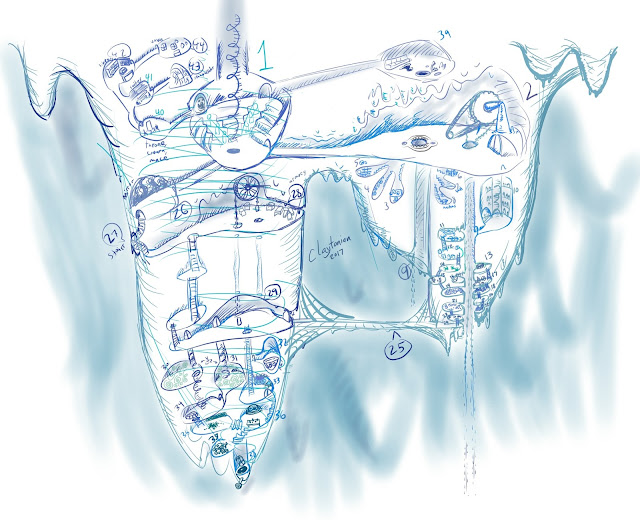 Here is my take on the #DeepCarbonObservatory map. Looks like Dr. Seuss drew the Grinch Meets the Underdark.

I hope it helps make things clear, but some things, such as the first room, had wonky dimensions and unknown numbers of statues, so this is just my take on it. It works really well on roll20; lots of zoom in power here.

Deep Carbon Observatory is that thing by +Patrick Stuart​​.

I really recommend the groundhog day approach to run the first part of this adventure (the town and dam).

I've decided the funnest way to run the beginning of Deep Carbon Observatory, with it's Sophia's Choice chain, is as a Groundhog's day infinite loop scenario. An early report I wrote on it:
Now the party is making different choices and seeing different consequences. They're on their second loop, and have already seen the butterfly effect. They're about to unwittingly hit the time trigger again...
One of the wizards in the wizard duel uses his stick of do-over each time he loses the duel (the party ignored them the first time). It creates a large sphere, and anyone caught in the sphere has their mind sent back in time to the start of the adventure, when the party was coming in via a ferry. The ferryman also remembers what happened. As does the artful dodger Wit. Nobody has figured out the trigger yet; they think the Oracular God has cursed them.

Also, at least some of the Crows experienced it too. I let the party catch a glimpse of the crazy dwarf just before the blast.

I considered having the time trick actually belong to the crows. Like they have an item that lets them have a do-over provided they feed it a soul it has never supped before. It still could be... in either case, it will have a drawback if the players manage to nab it...

It was a fun way to let the Crows terrorize them a bit. My player assumed the time gimmick was the main thing Deep Carbon was known for until I admitted the truth.