This article from White Dwarf 17 inspired something in me. Hive-mind PC races!

...a scatter of psi-rats. Your brains glow in the dark. You can gnaw through walls given time. You can suspend foes in mid air and throw them. You cloud minds.

...a parliament of Death-owls. You gain 1 Wiz per member. You can roll at/under Wis to know a bit about any one subject or person mentioned to the PCs. You can see the unrestful dead,and ask them one question per day.

... a slurry of slimes. You can merge to make a formidable mass for combat. You can slip through any crack. Hits whittle you down. Cold just slows you. You don't die unless fire or magic were used to destroy you.

... a troop of winged monkeys. You get fun hats. You have opposable thumbs. 3 or more of you can enter a barrel and make it roll imposingly about.

... a  writer's block of bouncing Salmon Rushdie heads. You can bounce and knock out foes with your bottom-parts. You have little arms below your ears that are good for little more than writing. You know a language for each head.

... a dash of raptors. You are small and can glide on proto-feathers. You can distract a foe while the rest of you comes in from the side.  You can open doors!

Tracking HP can be a bit of a chore. You have to minus from a total, unless you are one of those clever people that have discovered you can just add up damage and see if it equals the HP of the monster.

Another thing is many RPGs imply you should roll those hit dice. Sure, they all provide average HP, but it feels somewhat mendacious to use that number.

So for a while I used the cross-off system. For each hit die the creature has, you can assign it a wound box or space or something. When a PC hits your monster, note the damage of the attack. 4 or less means you do a slash through a box. 5 or more mean you do an X. If you already have a slash and you would have to apply another slash, do it in the opposite orientation and you've got an X. All boxes being xed means the monster is dead. Simple. I still recommend it.

But what I've been doing for a couple years is using dice as psuedo-minis to keep a theater of the mind laid out. It's great for running online games. It's also a way to track HP. With 1HD creatures you can literally roll the HP and see how healthy your monsters are. With higher toughness creatures I usually give them a series of hits, like the hit boxes mention above. For instance, a three d8 monster would probably have about six hits on it, so I can just turn it to the six side. Or I could turn it to the 3 side and take it down a pip whenever the monster has suffered two weak blow or one strong blow. I kinda fluctuate in my methods.  I've pulled out d10s and d12s to take care of even tougher monsters too.

Here's a pic of an actual fight:
The green sticky notes represent players. I can write conditions such as "on fire" right on them. Placing dice by them lets me know which monsters are attacking which PC, which gets important in games with withdrawl moves, etc.  In this pic, one player has 3 baddies on him, but the others are all relatively monster-free for the time being. Only d6s are monsters in this particular battle. 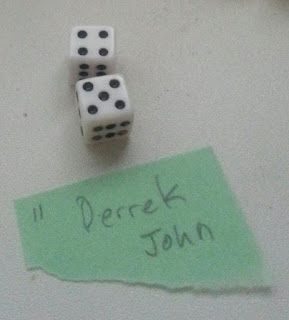 This player (one Derrek played by one John) has ensorcelled a baddie since the last picture. It is now at the top of the picture, to the north of another monster, to show that it is attacking its former comrade. Note also Derrek has a couple hash-marks on his sheet to keep track of how long that charm spell is going to last.

Email ThisBlogThis!Share to TwitterShare to FacebookShare to Pinterest
Labels: use this
Newer Posts Older Posts Home
Subscribe to: Posts (Atom)