The one with all the Bs.

Your stats are your health, but there is hardly a death spiral. It is a resource that you can manage with cleverness and wisdom.

Check it out on Google Docs (where you are honor-bound to point out typos). Or embedded in this post, down below.

Email ThisBlogThis!Share to TwitterShare to FacebookShare to Pinterest
Labels: I made an RPG, One Page RPG

I run a lot of games. Every Saturday the lads and lasses gather and I usually run a one shot with one of my one page RPGs. But some things are usually the same for whatever elfgame setting I am laying out. Here are a few things I have as my default mythos. 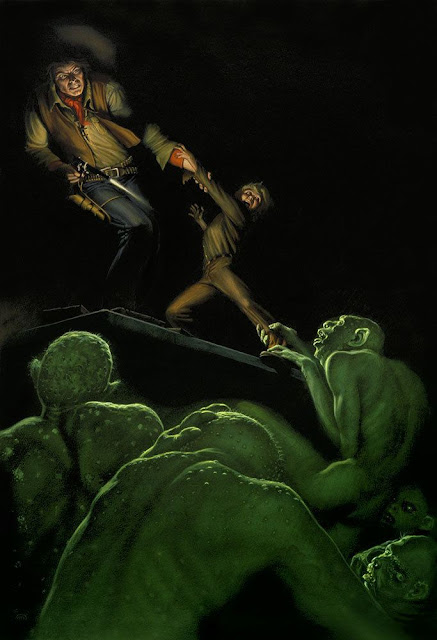 Robots and god-computers are supposed to be everywhere. I am way behind on my robot quota. In general, the world is supposed to have clues that great civilizations have come and gone, and are out there in the cosmos.

I want to seed more slow mutants too. In general, a lot of The Dark Tower octalogy exists in my world, such as "the Jesus Man" being a god and gunslingers wandering the land.

Amazons are a buff, seemingly human but definitely not human race that has nothing to do with real world Greek legends. They look like us, the bad tribes steal human men and have no interest in human women. They do have use for men in terms of baby-making, but they only have more amazon (female) children.

Lately, the amazon cannon has expanded to include hags. Hags are what evil amazons evolve into, and they steal men to make more babies, but hags give birth only to monsters. Most amazons encountered are the PCs themselves, so the evil potential of amazons has been unexplored. Good players.

Manazons also exist, but we don't know how they reproduce. Only that they seem to look like human men, but that they are not. Maybe I should look into Gargareans?

Alignment languages are not cants or code-phrases. They are writings and vocalizations that only someone of the proper alignment can parse and comprehend. If you lose your alignment, you forget the language. It can be written down, but it just doesn't make sense to those not of the way. Only beings of other worlds naturally make these vocalizations, so the PCs can't spout Lawful to an angel and hope to be understood. There is just a certain quality to it that can't be imitated by mortals. It's like that Yiddish-speaking grandma you have that you understand yet can't speak back to in Yiddish.

Orcs don't exist. Oh, a few have slipped in over the years, but I've always regretted letting it happen. Orcs are boring. The kids on twitter will call you racist. Just say no to orcs. Evil humanoids that bubble up out of the underworld's toxic plasms? Okay, that's better.

The underworld is mythic, filled with dungeon-logic. You dig deep enough, and reality starts to change on you. Here's a good source on that sort of thing.

Gnomes are a foot tall. They are David. They are not PC race material.

Elves don't age. They live forever. They have lived forever too, as far as they can remember, but they can only remember a couple hundred years. Everything feels like it happens in the blink of an eye.

Dwarves reproduce through sculpture, not something as dainty as sex. They don't make women themselves, but occasionally have been commissioned to do so ala Pygmalion. Dwarves also do not cast spells, but they can make magical rings, swords, and other artifacts. Dwarves love gold and can smell it. They turn into dragons if they amass too much wealth and don't share it with their clan.

BTW elves and dwarves, not elfs and dwarfs.

Just as every monster is best if it is unique, so too for magical items. No +1 swords in these games.

More on the cosmology is contained here. The players have only uncovered a small bit of the information in that post or this one. I like to let them discover what they like, as if they are amateur archeologists. There is probably some fancy word for this kind of world-revealing. Diagetic? Whatever the word for the opposite of a blog post is.

Email ThisBlogThis!Share to TwitterShare to FacebookShare to Pinterest
Labels: My Campaigns and houserules

And now for something completely nihongo

I translated a short game because it looked easy. I did not make the game in this case, even though I make an average of one RPG in my folder per week, but I did kinda alter it a bit and added a missing 8th spell. But this will be pretty useless info if you are not a Japanese reader. If only there was some way to find the original English version. If you are a nippongo-lover, here is the current version of it!