I am having a hard time justifying more than one fighting class. With wizards, you have things like schools of magic and esoteric secrets, but even then I feel a bit of a need to have a unique mechanical approach. To that end, I present a couple more possible starting abilities for the Sword for Hire.  Optional starting abilities replace the standard ones, and they are little more character-defining, so the ones you swap out will never be available unless you retrain or something. I haven't decided. Multi-classing rules we've had until now are not that great yet, as far as I've thought about them. Anyways, enjoy these brutal alternative starting abilities:

And here is a general ability.
--
* idea credit goes to ACK

Kill It With Fire did not evolve in a vacume; it is a pastiche of my memories and impressions of many systems and modules that I have run accross.

Somehow or other, I have ended up with quite a few PDFs of older gaming publications and books, and I'll be exploring how they influenced my thoughts.

One thing that seperates me from most every other gamer today is that I have never played an MMORPG. I like JRPGs, but MMORPGS, Wizardy, and other intesive RPGs have never been able to hold my interest. The closest I came was Neverwinter Nights or Nethack, but let's face it, these are simplified for quick play as well. So you won't see me talking about MMORPG-type games or mechanics.

But in this first session of Inspirations, I'm going to talk about Clark. I first encountered him as part of a collection that had such guilty pleasures as The Drud, but his story really stood out. It was The Double Shadow.


My name is Pharpetron, among those who have known me in Poseidonis; but even I, the last and most forward pupil of the wise Avyctes, know not the name of that which I am fated to become ere tomorrow.

So begins the tale. You see, Pharpetron is being haunted by a new shadow, which is constantly getting closer to his own. This is the price of his probing into the past via the agency of a shade (a ghost) into the primeval history, which was populated by terrible serpentine humanoids and their inscrutable magics.


We have solved the keyless hieroglyphs that guard ante-human formulae; we have talked with the prehis- toric dead; we have called up the dwellers in sealed crypts, in fearful abysses beyond space. Few are the sons of mankind who have cared to seek us out among the desolate, wind-worn crags; and many, but nameless, are the visitants who have come to us from further bourns of place and time.

The price of any reward in a decent RPG is measured in risks, and your own hubris is always lurking in the shadows to bring you down.

Anyways, when I read this story, with its mummy servants and whatnot, I thought to myself, this Clark fella is pure D&D.

One of my favorite stories of his has several examples of strange monsters and encounters, like some sort of horrific hex-crawl. It begins:


The sand of the desert of Yondo is not as the sand of other deserts; for Yondo lies nearest of all to the world's rim; and strange winds, blowing from a pit no astronomer may hope to fathom, have sown its ruinous fields with the gray dust of corroding planets, the black ashes of extinguished suns. The dark, orblike mountains which rise from its wrinkled and pitted plain are not all its own, for some are fallen asteroids half-buried in that abysmal sand. Things have crept in from nether space, whose incursion is forbid by the gods of all proper and well-ordered lands; but there are no such gods in Yondo, where live the hoary genii of stars abolished and decrepit demons left homeless by the destruction of antiquated hells.

The protagonist encounters many strange and dangerous creatures, including a shadow that follows his own (a relative of the creature from that other story maybe?) and a walking suit of chainmail, but then he sees the mummy:


But on its heels ere the sunset faded, there came a second apparition, striding with incredible strides and halting when it loomed almost upon me in the red twilight -- the monstrous mummy of some ancient king still crowned with untarnished gold but turning to my gaze a visage that more than time or the worm had wasted. Broken swathings flapped about the skeleton legs, and above the crown that was set with sapphires and orange rubies, a black something swayed and nodded horribly; but, for an instant, I did not dream what it was. Then, in its middle, two oblique and scarlet eyes opened and glowed like hellish coals, and two ophidian fangs glittered in an ape-like mouth. A squat, furless, shapeless head on a neck of disproportionate extent leaned unspeakably down and whispered in the mummy 's ear. Then, with one stride, the titanic lich took half the distance between us, and from out the folds of the tattered sere-cloth a gaunt arm arose, and fleshless, taloned fingers laden with glowering gems, reached out and fumbled for my throat . . .


Other good D&Dish tales that I have discovered of his include The Coming of the White Worm, The Beast of Averoigne, The Black Abbot of Puthuum, The Charnel God, Seven Geases,  and many others. I also noticed that the Genus Loci became an epic level monster in 3rd edition D&D, but the most Ashton references are of course to be found in Castle Amber. Say, that one had brain eaters and a corpse colossus that got put into TELHB too. I loved that supplement.

Further reading on Smith. And his works collected here.

This is a player interpretation of the hex map I introduced here, this time draw by one of this blog's contributing artists. You may be able to see more here (I'm not sure if it is a public album). Am I not a blessed DM to have such players?

BTW, the original adventure called for giant spiders and centipedes and weasels. Snore. The spiders have faces like unto The Juggernaught and speak demonic cant. The centipedes have upside down human faces ala The Thing. The weasels are just more centipedes. Stats coming up for all the monsters in this adventure soon... 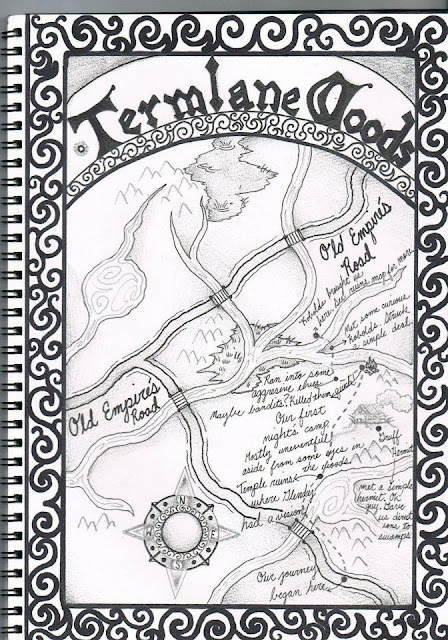 Email ThisBlogThis!Share to TwitterShare to FacebookShare to Pinterest
Labels: Scottart

Todays class uses player skill in narration to a high degree, the goal of which is to simulate the heroics of a pulp character. You'll notice their are few keywords with this class, and approach I may retroactively edit into older classes (gotta think about it).

A Jack of All Trades is an adventurer that specializes in certain areas that come useful in dungeoneering and other lucrative fields.

Motivations: Most Jacks are motivated by monetary gains, retiring after getting enough booty to live comfortably. Others work at the behest of patrons, such as thief guilds or excentric collectors, that may make it hard Jacks that want to get out of the business of delving ("every time I think I'm out, they pull me back in"). Of course many Jacks dream of one day being the boss themself. 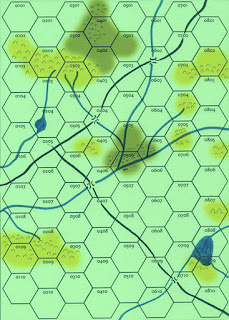 The Wandering Trees is an old adventure from Dungeon Magazine (#67) that I have repurposed for a level 1 DCC Google+ group I run. BTW, we can always consider new players if you are up at 20:30 Japan time.

I like the adventure so far, but it is a bit overcomplicated and ambiguous as presented in the magazine, so I have made a hex grid for it. The original adventure has paths that have a probability of disappearing that was very complex and expressed on a chart with letters and whatnot that takes a bit of time to reference. Instead, I am just going to roll a d6 every time the players encounter a possible path or if they have traveled on a path for long in terms of hexes or time. On a 3 or better, any paths in the area will show up. If they are on a path when they cross a hex, I roll to see if it disappears around them.

You can click the map to zoom in and download it. Also, you can see how we use a shared Google doc to map out the paths the players have already discovered here.

After the adventure is done, I will share my random encounters table with you. But I can't share it where a player might see just yet!

Email ThisBlogThis!Share to TwitterShare to FacebookShare to Pinterest
Labels: use this
Newer Posts Older Posts Home
Subscribe to: Posts (Atom)