The below excerpt is for a nostalgia-clone, a term which I use to mean a module that is an homage to
something from our hobby's roots. Basically my attempt to rework old things, such as Tegel Manor,
for modern sensibilities. That being said, GET HYPE! 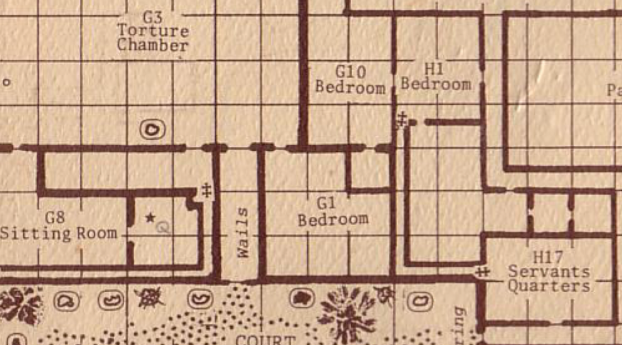 The dark manor was erected in time immemorial by peoples unknown on a bluff overlooking the sea. The caves underneath are believed to have been once occupied by druish peoples who made great standing stones to their dark, best-forgotten gods. They are now rumored to be peopled by the sea-changed, beings that the deep sea gave back. The most recent owners of the manor were the Shrumps, a tribe of petty aristocracy over given to occult dalliances, overly alliterative appellations, and, of course, madness.

The nearby Shmégelburg and the enclosing province of Shmégelstan probably got their names from the manor, but where the manor got its own name is a forgotten mystery. It is a few hours ride from town to the manor, but the way is rarely trod these days; rumors of headless horsemen, harrying brigands, Adam Ant, and walking, wet corpses are rampant.

The manor follows horror trope rules: Damage done to it heals, paintings are likely to curse you or be doorways to other worlds, and statuary has a strange sense of humor. Of course, monsters are right at home in the manse or its tunnels; they are more or less immune to and are part of its effects.