This is attempt to patch a glaring hole in the rules of ICRPG, which probably shoulda had two more pages of weapons, one for gerblin gun priests, and another for all the polearms. Ew, my Gygax was sticking out.. We need old fashioned guns, that's for sure! 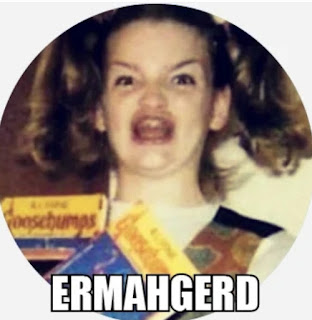 If you roll a nat 1 with any gun, you have exhasted an ammo slot unless you roll a second 1, in which case there is an explosion.

Of course, there are futuristic ray guns out there somewhere, with better stats.
----
Share good posts with good gerblins. Claytonian at the gmails.

I had a sads when I saw how the Twitter algorythm treated my last post. I shouted, “WHAT DID THEY DO TO MY BOY?” Here's a play example to get those rookie numbers up, cuz I’m telling you, the post had some good ideas.
So the titular trio waltz into a watering hole and scope the seats. Filcho and Drayno decide they want to jump into the game of Groat my Gryphon they see at one of the tables, introduce themselves under fake names, and sit down. Meanwhile Wizzo spies a trollop at the bar that doesn’t look too expensive. Oh, you thought Wizzo was a dude and I’m being sexist? Pfft. No, Wizzo is a lady, so that’s on you and thousands of years of patriarchy.
Filcho and Drayno, rogues that they are, both decide to cheat. Filcho is 3rd level thief, so he has a 3 in 6 chance of thieving. Drayno is a 4th level fighter, and so only has a 1 in 6 chance. Guess who is going to screw this up.
Meanwhile, Wizzo find her hair in her drink right in the middle of a line about how the Gamete Hills are beautiful this time of year. What the hell? She uses her wizard eyes—she’s 2nd level— to try to find out if magic is afoot. She has a 2 in 6 chance. The player rolls a success. Ah, the culprit is a toxically possessive leprechaun on the whore’s lap. “I see you! Time to taste my Ensquirrelating Beam!”
But just then, a brawl breaks out behind Wizzo. Drayno has fumbled his cheating roll. Drayno attacks an angry gambler with his club. The attack doesn’t hit, but the club damage roll is a 1, so Drayno’s player announces that he kicks the table up on its side to give some cover. Filcho wants to do a ambush with his blackjack, and so waits for someone to poke their head around the side. He rolls an attack and hits, but his damage die rolls a 6, so he doesn’t get any extra damage.
Wizzo is like, I just want to get out of here, and runs for the exit. 1 in 6 chance for that, as a wizard. She rolls a 3 though, so someone intercepts her. NO! The DM just had a better idea. Leprechaun chicanery has tied her boot laces together. She takes a pitch forward.
That was round one. Their adventures will continue, but I think I’ve shown how the system can work.
----
Share good posts with good goblins. Claytonian at the gmails. 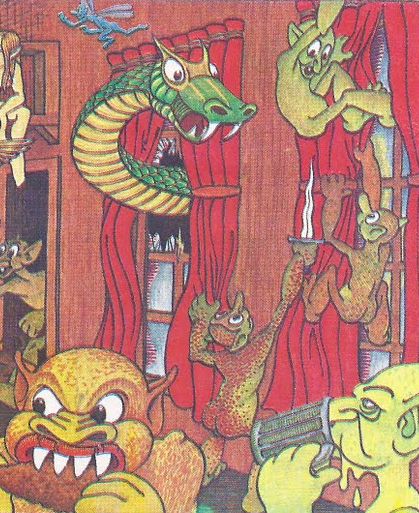 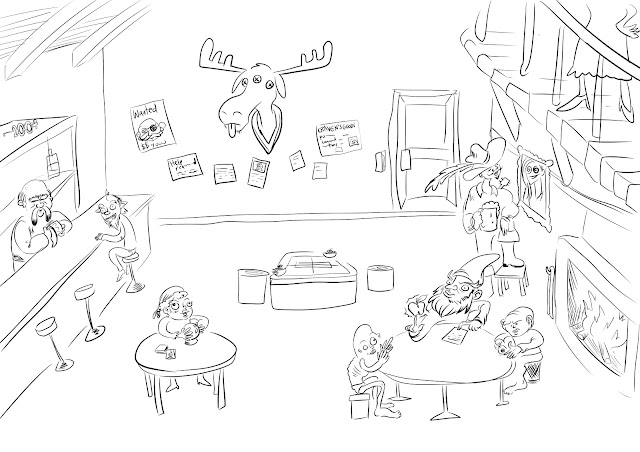