Epic Humble Beginnings, a tale of starting a campaign


I need to break out of my cowardice as a DM. Namely, the fear of running without a module in front of me. But that doesn't mean I'm going to free-ball it. So here are things to help me plan.
The campaign starts in the town. The town is slightly isolated. There is a great empire ruled by the Underlord. The empire is evil, but since the Underlord wants to rule humanity instead of destroy it (for now), the village isn't much bothered most of the time. There is a mayor who collects grain from the townsfolk to give up as tribute to the Baron's collector or the occasional garrison that comes up from the city-state of the invincible underlord.
The first line of the campaign will be, "your loins are being girded by the white girdle of novice cubs. As they cinch your nethers a bit too tight, the guild receptionist-slash-bartender mutters,  'Be sure to write your name on this, so they can identify your remains.' Then he moves on to the next member of your party. Now then, who is our sole demi-human?"
There is one demi-human in the party to start. Other races can be unlocked by encountering and befriending them. But otherwise, this is pretty anthropocentric beginning. Also ask who has the highest charisma-like stat. They are the de facto leader of the party.
The guild is in a public house. Joining is one coin. Beer is one coin. A night with the village sex workers is one coin and a lot of shame. A sniffer of blue-mold is one coin. Everything is, except weapons and armor. We don't even have a dude that knows how to make armor yet. Maybe you could unlock that by doing a quest for the dwarves, who are in some nearby mountains working on their glory holes.
How did you feel when I did a little blue humor just now, players? Let's talk about lines an veils.
There are a few quests on the guild bulletin board. Most people in the village can't pay much though. Maybe you have to find your own fortune. Can't clear rats out of basements all day.
The town is not too far from some manse reputed to be haunted. This is mega-dungeon one. It has 666 rooms, each more haunted than the last. Lots of cursed treasure too.
The town is also not far from some standing stones, which are rumored to be a gate to The Zone. This is mega-dungeon two, but it is more of a hex crawl through a parallel world with many ruins.
There is a forest between here and Hinterville, and the forest is a forest-crawl. People say that the druish people there had great treasure. This is an odd rumor, maybe a bit racist. Anyways, people say barbarians and bandits are constantly in those woods, coming down from hyperboreal mountains to the north. The woods have an underground network below them full of dinosaurs and mushmen. This is mega-dungeon number three.
Hinterville is said to be a lawless place under dispute by three wizard siblings and their subhuman creations, the slow mutants. But it might be worth going there to learn a spell or two.
To the south are the Thousand Misty Islands in the Four Lakes. People say that the are used to not be a sea, until some great disaster made a huge crater there. Traders, slavers, pillagers, and the dead live on those islands. The Necromancer has her great keep somewhere amongst the islands.

A table of nasties for The Zone

What follows is a map. Plan B. Based on some old Judges Guild stuff. 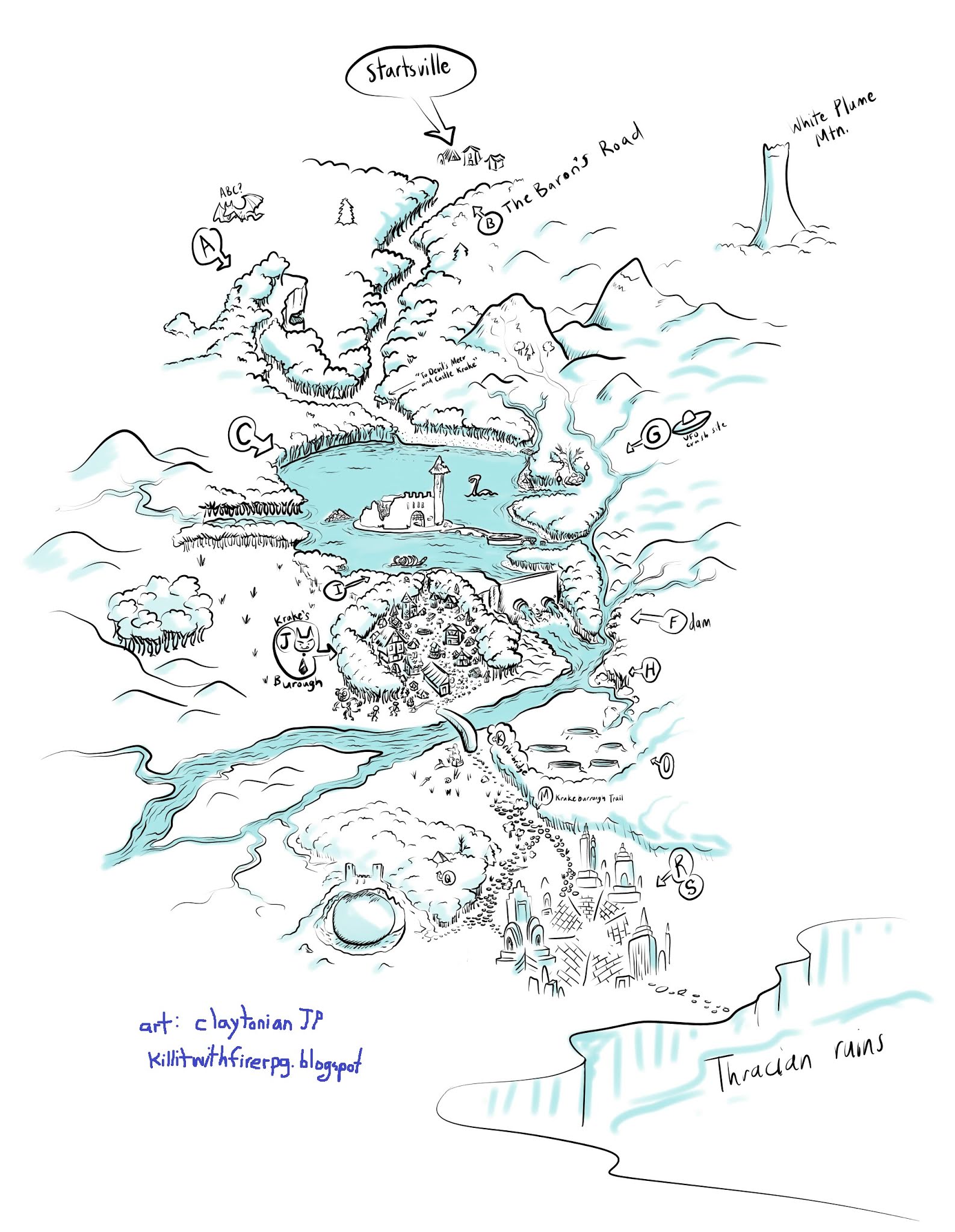 Email ThisBlogThis!Share to TwitterShare to FacebookShare to Pinterest
Labels: DumbRPGidea, My Campaigns and houserules, use this

Edit: The version written (not embedded via Google docs) won't change, but after some actual playtesting, I now invoke my duty to update the G-doc rules...
Recently, I've been going through my massive games Claytonian made folder, polishing turds and gilding lilies. Today I found 2d6 RPG and I was digging it. This looks fun and simple! And check out the BUT ACTUALLY SYSTEM. The monster wagers system is also something I want to see in play. In case you are wondering, I think this game is a riff off of Barony, rather than any Powered by the 2dpocalypse game. Barony came first!
I've made so many games I forget what was up with them. I'll embed the google doc at the bottom of the post (it will be the most up to date version), and input the text of the game above that for ease of reading.

To dice your way thru life, roll high as you can on 2d6.

Yikes This one goes to eleven

Combat is a bit special. The number you roll is the number of damage you or the foe takes. You have to roll at least seven damage to hit them (if you roll six or lower, you take the damage), unless you are fighting more than one foe, in which case the minimum number to roll goes up by one per additional opponent. Low roll spells hurt you too.

The But Actually System

For each level you gain, you get a Freebie checkbox. When you would take damage, you can instead check off one of these boxes and describe how you evade the hit, at some credible narrative cost. For instance, by saying "Actually it sunders my shield" or "Actually I duck down and get a bit of a haircut."

You can also check off Freebie boxes to add mighty deeds to your successful rolls. For instance, “Actually, I shove my hammer down the dragon’s throat, and it lodges in there, choking her!”

Freebie boxes, once checked off, are gone until you level up.

Each PC gets 2d6 HP. Each time you level up, you reroll this and take the new roll as your new HP if it's higher (this is not accumulative; the max HP any PC will ever have is 12).

After you roll starting HP, choose if you will be able to use magic or not. If not, you may gain one level straight away.

PCs have 2d6 shticks (talents/backgrounds/traits/&c). Make them up as part of character gen. When a shtick applies, a check's difficulty is one step easier.

0 HP characters are unconscious and will bleed to death within 2d6 rounds (rolled secretly). It is a daunting task to staunch the wounds.

You get all HP back at dawn each day. This does not heal narrative wounds though, so if you have a broken leg, it’s going to affect you for six weeks.

After a jolly good outing, the Two Dee Master (2DM) will announce a Leveling check. You can roll 2d6 and try to roll over your current level. If you succeed, you level up.

Remember, when you level up, you gain a Freebie checkbox, uncheck all Freebie boxes you have, and get a chance to have more HP than before.

You start with 2d6 items. This is also your Load score. If you would pick up more items than Load, you will have all checks be one step harder. Put something down, maybe?

During a round, you can perform one action or move 2d6 hexes (not both unless you use a freebie). Initiative is not really a thing. If you don’t take care of monsters, the DM will have them dispatch you.

Monsters get to do horrible things to you if you roll snake eyes to hit them. For instance, snake eyes against a giant may mean that it pounds you into the ground like a nail. Monsters have 2d6×Awesome HP. An underworld rage corpse probably has Awesome 1. A god may have Awesome 10.

Monsters can wager 2d6 HP to do special moves at the top of a round, like breathe fire. This never kills them. If they are not damaged before the next round, they gain these HP back!

Email ThisBlogThis!Share to TwitterShare to FacebookShare to Pinterest
Labels: another game, I made an RPG, One Page RPG
Newer Posts Older Posts Home
Subscribe to: Posts (Atom)