Merging Rhialto the Marvellous into The 998th Conclave of Wizards 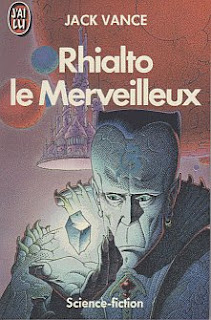 The 998th Conclave of Wizards (Goodman Games) has a couple minor issues. One of them is the introduction scene of the wizards. There are two problems with it:
1) There is a page of flavor text introducing them. Split over 2 pages. And the players are expected to sit through them. Talk about OSR sacrilege.
2) The wizards aren't Rhialto the Marvellous and his buds.

So the solution, as I see it, is to skip the scene altogether. Rather, the players are brought to the city by some random circumstances. In my own campaign, I had the city be the silver city on the moon hinted at by Raggi in The God that Crawls. And Scotty from #Shmelerak sent them there. There are a million portals that could be seeded.

Once in town, they hear the the Stary Council is looking for new (male†) recruits, who will be allowed to attend the next conclave (like comic-con for wizards), and get library privileges, etc. If they inquire further (they don't have to because agency, m'kay), they get to meet first one of the little people that provides handy exposition and then 1d3 random members of the Rhialto Super Friends Squad that happen to be holding court that day. Here is a d24 table of them:
*: As diabolism is verboten, Shrue is likely the secret villain of this module.
†: Teutch will refuse to hold court with females in attendance. This is but one of the facets of the council's sexism. Females are much derided by the order as they think women to be seduction targets at best and dark practitioners of the art of ensqualming at worst. Let players hate the wizards; they can relish them being taken down in the future by that old threat from a previous aeon: The Murthe. Or maybe the PCs will actually help out on the conclave's darkest hour, because agency.

More details about each wizard can be found here.

Anyhoo, outside of the council court encounter, the players can look into rumors and such, finding out details of whatever wizards they want to target for burgling, the spell duel, or patronage.

At some point, roll one of the wizards to be missing along with the Baton of Perpetual Light, opening the option to go to their tower or The Obelisk out in space.

The wizards should be given ad hoc spell-effects in a spell duel based on the following d12 spell names/how high they rolled (just roll one each round the wizard can cast something; roll a d5 to see what level the spell is):
----
Want to give feedback? Share this on g+ and give me a tag (+claytonian JP) (if you want to keep it private, share with only me).
If you spot a typo or don't have g+, you can just email me. Claytonian at the gmails.