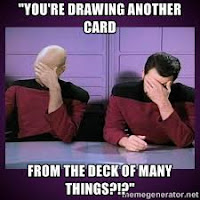 Recently a coworker gave me his old 3e core books. I don't like 3e at all, but I have to admit, the DMG of any edition has fun things for me to think about. Someone requested a DCC Deck of Many Things. Turns out there aren't many results on the 3e version of it, so I glanced over it, got ideas, and condensed them to 14 results. And since we are talking DCC, you could just roll a d14...

In any case, I'd probably have the deck only allow drawing of one card per PC (exceptions in the result).
------
Want to give feedback? Share this on g+ and give me a tag (+claytonian JP) (if you want to keep it private, share with only me).
If you spot a typo or don't have g+, you can just email me. Claytonian at the gmails.