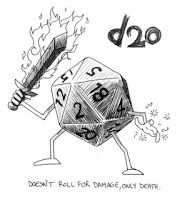 First, let's cover the usual Shmodrons, which happen to be shaped like the dice most commonly used in this hobby, and who represent one faction of an insane holy war between mechanical monsters.

The Tetradron (represented by a d4), the Hexadron (d6), the Octadron (d8), the Decadron (d10), the Dodecadron (d12), and the Icosadron (d20) are the most plentiful and well known of the Shmodron race. They all have an obsession with perfection, and seek to make the multiverse function like clockwork. Sometimes biologicals get caught up in their jihad, and the result usually isn't pretty.

Any time a Shmodron attacks, the Judge rolls a pseudo-deed die that shares the same sides with it (a d4 for a tetradron and so on). The bonus die gets added to the to-hit and damage rolls for the Shmodron. If the maximum value is rolled on the bonus die, a roll on the Shmodron criticals table (below) is done (use 1dx, where x is the modron's size). A Shmodron can also roll a crit with it's normal to-attack die (which uses the same table), but it doesn't ever double-crit or something. A Shmodron rolls a die the same size as itself on Shmodron Crits table as well.

Shmodrons  may roll a die that has the same number of sides as themselves for normal attack damage (add in their deed damage) if the DM wants them too; they can have a lot of arms...

SHMODRON CRITICALS DUDEZ!
1. No extra damage but a number (roll again) is burned into the target's flesh.
2. Target gets smashed into 2 dimensions for a round. They can't move or be smashed further, but Tetradrons and other pointy Shmodrons are really good at poking such characters for double damage.
3. Target is forced into the shape of a tetradron for one round. They can hop (5' movement), but are pretty useless.
4. Target steps on a tiny helper Tetradon they didn't know was there. 1d4 extra damage.
5. Hellfire erupts from an allied lawful evil dimension. 1d5 extra damage and on fire.
6. Target is cursed! Until they roll a six, they cannot hit anything. To comical ends this goes.
7. Seven-faced worms pop out of the target's flesh for 1d7 Personality damage.
8. Character must save or be time-stopped indefinitely.
9. A door to the nine hells opens. A lusty devil will grab any one properly lawful evil target and drag them down the underworld, or toss a pitchfork at any goody two shoes.
10. 1d10 years are added or taken from the target's age.
11. Target is stretched across 11 dimensions. Save or die.
12. A dozen rocks fall. 1d12 damage to everyone that doesn't save.
13. 13 becomes an unlucky number for the target. It is cursed to always fumble on a 13.
14. A Tetradecadron (shape of a d14)is summoned. It attacks the target immediately.
15. 15 bones break in the target. Start at the bottom of the target.
16. Target is knocked 16 weeks into the future.
17. Target must save or morph into a random Shmodron. Determine which by taking one of each die kind you have and seeing which one rolls the highest.
18. Target's head turns into a random shape (see 17) and falls off. Body is dead but the head can communicate like a glowing Star Trek sphere.
19. Target must save or have 19 rounds to live.
20. Target reduced to a chalky white cuboctahedron. Like that other Star Trek episode.

I'll leave 21 to 30 and beyond to your imagination.

So the Shmodrons that are not made out of faces that are all identical shapes are the other faction of Shmodrons, and they cultivate chaos to make complex, fractical-order in inscrutable systems and scales. Basically, they are orderly and insane. They crit in much the same manner as all Shmodrons.

They are led by Hebesphenomegacorona, The Crowned One. Hebes, as he is known to imaginary friends, does a custom crit if it rolls a 21 on its crit die: its crown transfers to the target, who's eyes burn out from insane energies and then the target is an undying thrall of Hebes for the rest of the fight, after which it's gibbering husk collapses, quite insane. Hebes is always interested in finding minions to do his work, and can be used as a Patron in DCC.
In case you are worried about our round pals, d1 Shmodrons are baby Shmodrons. Shmodrons mature as their mechanical hormones get the message that there is a need for them to. All Shmodrons pop off of the surface of the All-sphere, which is actually a hundred-sided being who's faces are covered with prime numbers. The All-sphere does not seem to take sides in the cosmic conflict.

----
Want to give feedback? Share this on g+ and give me a tag (+claytonian JP) (if you want to keep it private, share with only me).