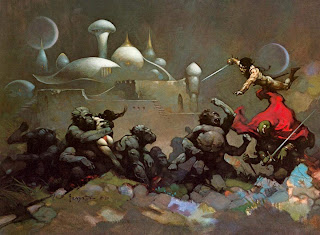 I'm finally getting around to adding my own crits for Quest for It, my fantasy heartbreaker that marries DCC with DW's "no boring rolls" mechanics. You can check out QFerrit here.

Anyways, here are some crits for edged weapons. Unlike in DCC, everyone uses the same crit charts, but there are options embedded in the charts for the fighter-types and other types. This is still a draft.

You could totes use these in a normal DCCRPG game by tweaking the ability score names and rolling usual crit die sizes. These crits are heavily inspired by http://www.windsofchaos.com's Warhammer crits, but I think Warhammer crits inspired DCC's, so it's a fun circle of death.

Cut 1: (1d7) 1) foe’s weapon and yours obliterate each other (they shatter); 2) wrist nicked; blood flow makes foe’s weapon get slippery next round; they’ll have to save or drop it; 3) foe’s helm is knocked off if they have one, but if they don’t they are momentarily disoriented, giving you the option to get in a quick jab at +1d or withdraw safely; 4) foe’s torso armor is busted open a bit (+1d to further dmg against them) or, if not wearing armor there, they are stunned for a round; 5) shin-slap forces foe to make a Con save or drop their weapon and hop around, gripping leg; 6) force of blow does 1d5 extra damage, but your weapon gets knocked out of your hand in the process and puts you in a tough spot that the Judge will describe; 7) you get your weapon stuck in foe’s extremity (losing it); they have to make a save or drop their weapon and desperately grasp at yours to pull it out in an attempt to stop the pain.

Cut 2: 1) foe disarmed and you have the option to follow them and get in a free attack at +1d if they try to recover it; 2) fingers grazed; save or drop weapon; 3) glancing blow against side of head causes-1d next round; 4) poke to foe’s side pains them and they lose use of shield for a round, or, if they don’t have a shield, they’re stunned for a round; 5) force of blow does 1d6 extra damage, but if this kills your foe, your weapon is stuck in them for a round (guts are a sticky vacuum); 6) foe slips on a heretofore unnoticed turtle; you get in an attack and they are stunned during it.

Cut 3: 1) biceps slash; foe needs to save or drop their weapon and is at -1d damage this battle; 2) temple grazed; -1d to damage and saves for a round; 3) rib broken and pierced; foe has to make a save or be stunned for a round as it wheezes and gasps in pain; in addition, if the save is failed another save is needed to hold onto its weapon; 4) thigh strike forces a save vs falling to the ground, stunned for a round; 5) foe’s shield or helm shattered d5 extra damage if they have neither).

Cut 4: 1) deltoid gashed; foe drops weapon in pain; even if they recover it, they won’t be able to do beyond 1d4 dmg this fight with their weapon attacks; 2) forehead slash drips copious blood into the eyes, giving attackers +1d to hit until middling; 3) weapon pierces right into trapezius; foe must save at -1d or drop weapon; 4) deep slice down to the bone of the upper leg; foe drops to the ground, and drops their weapon for a round; 5) smash foe’s hand; they drop a weapon and--due to a couple broken bones--cannot pick it up with that hand (off-hand attacks are -1d to hit/dmg).

Cut 5: 1) foe’s weapon shattered; 2) back of foe’s hand is skinned; they drop their weapon and have to make a save to avoid dropping things in the other hand to grip the wounded one; 3) slam to side of foe’s head, stunning them until a middling result is rolled; 4) chest gash; foe must save or be stunned until a middling result is rolled; 5) groin poke barely misses femoral artery; you may spend 1 Luck to force them to save versus bleeding out, and even if you don’t they still have to save versus gripping the wound in pain for two rounds.

Cut 6: 1) deep swing rebounds off of radius bone; weapon dropped and foe is at -1d to hits/dmg with this arm until it heals over a week; 2) carve a bit of flesh off foe’s neck causing blood spurt; they must get it bandaged before three rounds have passed or be forced to save vs unconsciousness each round; 3) gall bladder punctured, and it spills its contents; foe must save versus retching, and will die of infection if not well-treated; 4) weapon lodged in foe’s femur; they drop to their good knee and you have the option to make a +2d check to wrench the weapon out and deal 1d4 extra damage; 5) 1d5 extra damage if you aren’t a death-dealer, but if you are you enter a battle rage.

Cut 8: 1) biceps-tendon severed; this arm is useless until healed and save each round vs bleeding out; 2) foe tries to bend back to dodge, but you slice their nose off; save each round vs bleeding out and permanent loss of 1d to Cha; 3) groin stab makes opponent stunned until someone gets a middling result; save vs sterility; 4) knee-cap whisked off; foe falls to good knee and is not coming up this battle, stunned until a middling result happens; 5 to 7): 1d7 extra damage if you aren’t a Death-dealer, but if you are you enter a battle rage.

Cut 9: 1) large chunk of one shoulder hits someone’s cheek; you may spend a Luck to have the chunk hit eyes and blind someone for a round instead; foe is bleeding out 2) weapon cleaves into helm or skull; in either case the foe is stunned until you pull the weapon out, dealing 1d12 extra damage; 3) bladder puncture; unless healed somehow, foe must save vs infection and also has a permanent, stinky leak, netting -1d to Cha; 4) upper and lower leg-connecting ligament severed; foe writhes helpless for the rest of this battle and will be at -1d Coord when moving in the future; 5) roll a result from above and enter a battle rage if you are a Death-dealer.

Cut 12: 1) guts spilling out all over boot; foe may only numbly attempt to scoop them back up and will die at battle’s end unless supernaturally healed somehow, and even then the experience will leave them with an insanity; 2) foot shorn off; bleeding out on the ground and will need a peg-leg to get around; 3) gash right through an eye ruins it beyond natural healing; save vs fleeing and infection; Char checks affected; if foe is a death dealer they may spend a Luck to avoid all secondary effects and instead get mad enough to enter battle rage; 4) collar bone is driven down near the lung; foe must make Luck check or have lung pierce by bone, which kills with d10 rounds; even if that save is made the arm is useless until healed and foe is -1d to everything; 5) you pin foe to a surface, you may spend 1 or 2 Luck to add one or two extra people to the weapon-kebab, respectively, depending on how long your blade is; 6) you enter a battle trance, reducing all incoming attack damage at you by 1d for this fight; 7) roll a result from above and enter a battle rage if you are a Death-dealer.

Cut 13: 1) Arm severed at the shoulder; bleeding out and if they somehow survive the foe will be at a permanent -4 Coord die sizes; 2) lower jaw and tongue have a bit nipped off; several teeth gone, affecting Cha rolls; bleeding out and unable to cast most spells in the future due to speech impediment; 3) puncturing in from the side,through a kidney, and lodging in the spine renders foe immediately unconscious and bleeding out; even if they survive that and an infection save, one or both legs will be permanently paralysed; 4) leg severed at knee; only magical healing can stop this bleeding in time; 5) you deal class damage die in bonus damage to a nearby secondary foe too; Death-dealers can spend a Luck to repeat this with a tertiary target, etc.; 6) you enter a defensive stance, reflecting all 3 damage or lower rolls back at your opponent; 7) roll a result from above and enter a battle rage if you are a Death-dealer.

Cut 14: 1) right through the shoulder and deep into the chest your blade goes; foe can do naught but slide down to the floor to die from bleeding out with no chance of saving; 2) slashed from temple through jaw and past the collar-bone; they die right away and you are showered in jugular blood, making all foes that witness this have to save vs fleeing and then save again for each ally that fled; 3) as result 2, but the shower comes from a severed aorta; 4) deep puncture into femoral artery reduces foe into a spasming blood-sprinkler flopping about on the floor; no magics will be fast enough to save them before they die within a round; 5) roll a result from above, and an extra crit against a nearby secondary foe, then enter a battle rage if you are a Death-dealer.

Cut 15: 1) from one shoulder to the opposite hip, you bifurcate your foe; 2) decapitated head lands in foe’s ally’s hands, scaring them off; 3) a vertical cut flashes, then you pause to let your foe realize that they are dead as their surprised halves fall apart; 4) cruciformly-separated quadrants tumble to the floor; 5) roll a result from above, and an extra crit against a nearby secondary foe, and you may pay one Luck per target beyond the second that you want to crit, then enter a battle rage if you are a Death-dealer.

Email ThisBlogThis!Share to TwitterShare to FacebookShare to Pinterest
Labels: DCCRPG, inspirations and ripoffs, KIWF Rules, Quest For It